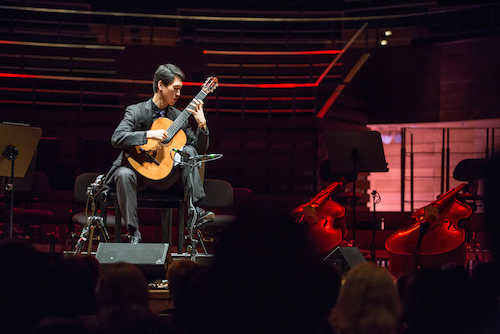 Tengyue Zhang was born in China in 1993. He commenced classical guitar studies at the age of 5 and when he turned 7, he began to study with Professor Chen Zhi. In 2005, Zhang entered The Music School by The Central Conservatory of Music in Beijing. During this period, he attended masterclasses delivered by Roland Dyens, Alvaro Pierri, Michael Lewin, Shin-Ichi Fukuda and many other renowned international virtuosos. Since 2012 Tengyue has studied for a BA in Music at The Juilliard School under the guidance of Sharon Isbin.
Zhang has won several awards at prestigious guitar festivals, such as the Sixth GFA INT. Guitar Competition Senior Division in America, IV Parkening International Guitar Competition, 13th International Guitar Youth Competition in Vienna, or the IV Changsha International Guitar Competition. In years 2009-2011 he received the award for professional excellence from The Central Conservatory of Music in Beijing, China.
Tengyue Zhang has wowed audiences since the age of eight, when he was called “the Little John Williams” by the German virtuoso guitarists Dale Kavanagh and Thomas Kirchhoff.

Congratulations once again! It was a great pleasure to see your performance in Wrocław at the gala concert in October.

Can you tell us why you decided take part in our contest?

The Guitar Masters 2016 is one the biggest competition in Europe and the jury comprised of great musicians I truly admire!

How did it feel to hear your name read from the stage at the awards ceremony?
It was joyous, but.. the fact is that I would have preferred if the winners had been announced after the final three players’ performances. In my opinion it would have been better both for players and audiences.

The three prizewinners were sitting in the audience for about an hour before they were called on stage for prizes. The third place winner, that is me, needed to play right away with no time to warm up. I found it quite stressful, not really good for calm mind that’s needed for pure music making, especially after hearing the big news of results. On the other hand, I understand that it wouldn't be interesting for the audience to listen to all the players without knowing which prize each of them won. 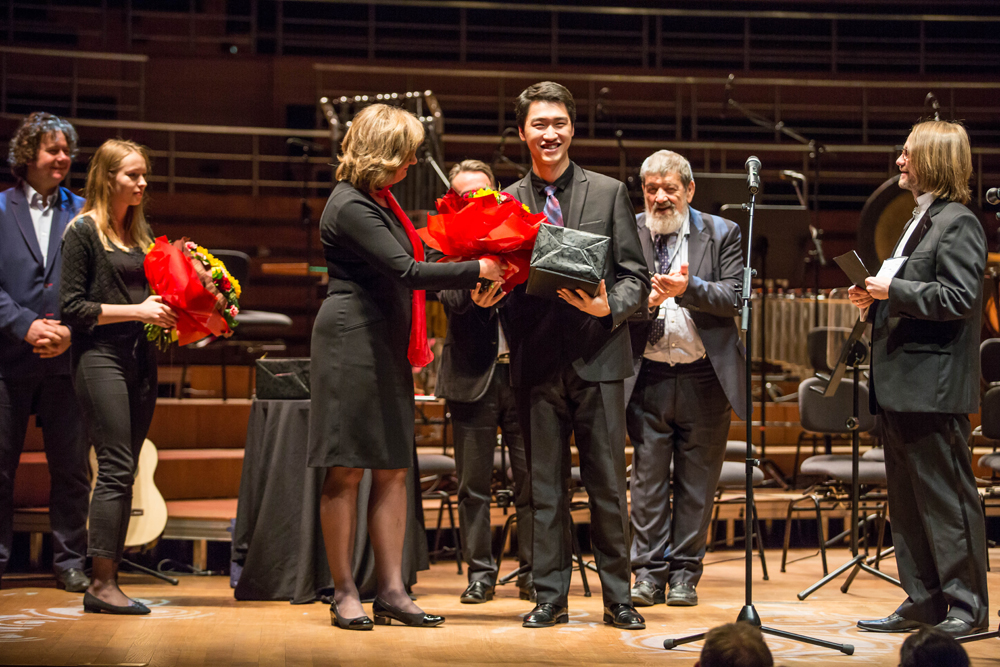 How old were you when you started playing guitar and why did you take it up?
I started playing guitar when I was about 5 and half years old. I tried to learn multiple things from my father, and that included violin, electronic keyboard, swimming etc. I learned how to dance from my mother, too. I once even got to dance a girl’s part in elementary school play, because the team was one girl short. Haha!
But I decided to stick with guitar at last because I simply love it. I still remember the very first time when my father taught me to play guitar. This scene is still vivid in my mind when I close my eyes.
Can you tell us a bit about your musical inspirations? Can you name any composers, musicians or virtuosos that you mostly look up to or source your inspiration from?
I look up to many artists. They all give me diverse and irreplaceable inspirations. A quote from one of my heroes, Professor Chen Zhi, with whom I have studied for over 10 years in China, was that "Everyone is my teacher". This sentence has become one of my lifetime mottos!
A great source of inspiration came in the form of a soul-touching lyrical guitar playing, combined with the non-compromising ear in musical pursuit as well as mathematical precision in music making. This quite unusual fusion could only be given by another hero of mine, professor Sharon Isbin.
I source inspirations not only from classical guitarists, but also from enthusiasm and bold musical expressions of the great Flamenco guitarist Paco de Lucia, Petrit Ceku's stage presence and confidence, Xavier Jara's amazing legato and strong musical directions or Marcin Dylla's control of music… So you could say, there’s plenty of artists that I admire and get my inspiration from.
Was there anything that surprised you during the Guitar Masters 2016 contest?
It seemed very well organised for the first edition! The concert hall is amazing and I think many people loved the ceremony. I am surprised by the number of contestants who participated in the competition, even the final had 12 players! Other competitions I know would normally have 4 to 7 musicians in the finals.
It all started with a video submission to Guitar Masters
What impact do you think this contest can have on your future career?
It was such a great experience! I saw and heard many great artists and compositions through the live streaming and also live in the hall. Everyone I met had something that I wanted to learn from.
What constitutes a good live performance in your opinion? What’s your approach to performing on stage?
Good live performance requires doing mental work while not playing. It is about thinking and imagining the perfect music and it entails pure confidence and immersion in the sounds.
Do you have a piece or composition that you most enjoy playing?
If I have to name the piece the I most enjoy, it's Chaconne from BWV 1004 by J.S.Bach. But the truth is that I enjoy playing every single guitar piece I know, even the warm up exercises!
What things in your life and career do you want to learn and achieve?
I want to take guitar playing to yet another level. I believe guitar music can be even more attractive and popular!
If you hadn’t continued with music, what do you think you would be doing?
That would be road cycling! I love road racing, and Chris Froome is my cycling hero!
What are your plans and next steps after winning the GM 2016?
I want to keep getting better and better! Guitar Masters 2016 rules - thank you very much!