Interview with Soenke Meinen
The Winner of the Fingerstyle Category 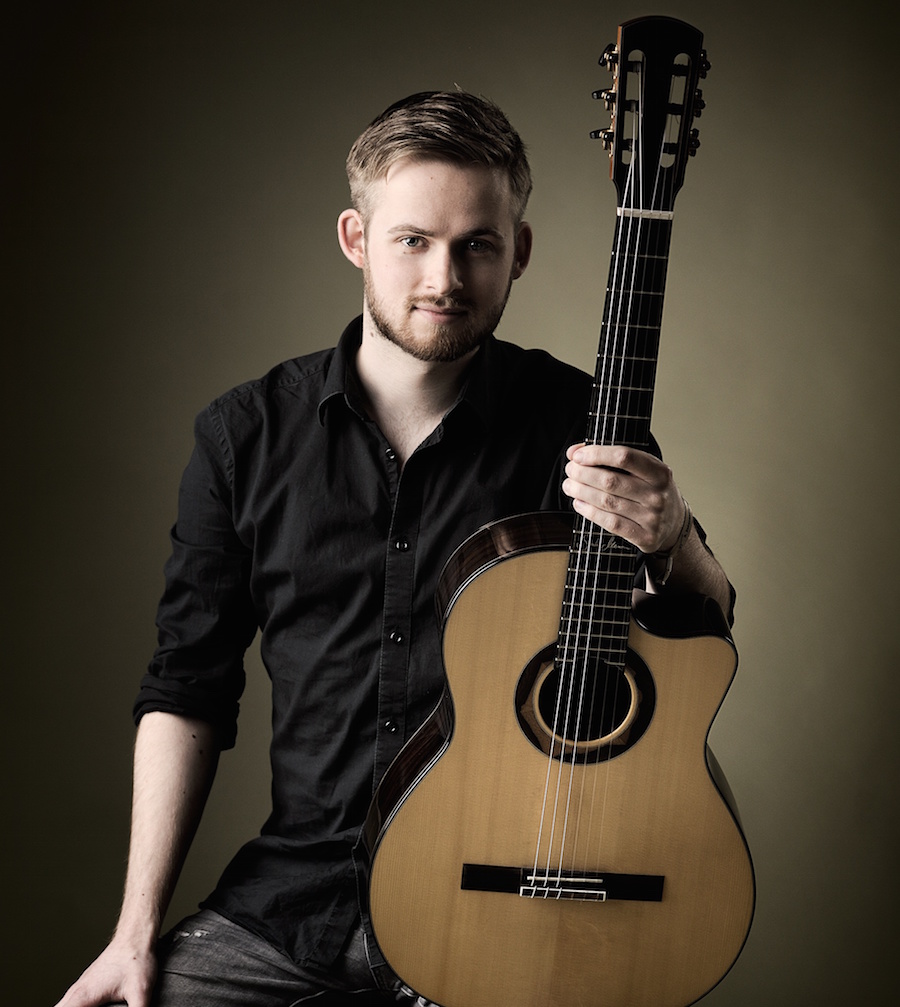 Soenke Meinen was born in 1991 in Aurich, Germany. Having studied at the College of Music in Dresden, Soenke has received tuition from the renowned musicians, such as Thomas Fellow, Stephan Bormann or Reentko Dirks. Since 2011 he has played over 300 concerts, both solo and in group projects.

Of course, before the Guitar Masters success, Soenke had won awards at contests such as Open Strings or the European Guitar Award. He received “Deutschlandstipendium“ - the renowned scholarship and several other awards for musical excellence, including the title of ‘Artesano Guitarist of the Year 2016’.

Soenke is also the initiator of the International Freepsum Guitar Festival taking place each year since 2011, where he acts as artistic director and collaborates with local communities. His solo album ‘Perpetuum Mobile’ was released in August 2016 by DR. HEART MUSIC. You can listen to its trailer here.

Hi Soenke, once again congratulations on winning the Fingerstyle competition during the Guitar Masters 2016! You did an amazing job and I remember well the final concert audience not wanting you to leave the stage.

So was there any particular reason you decided take part in the Guitar Masters contest?

I did it for various reasons! To be honest, I don't regularly take part in competitions, but the Guitar Masters Competition seemed special in many ways. One important aspect was that it allowed me to play my own compositions and present my work in the same way as in ‘regular’ concerts. On top of that, the jury consisted of some really fantastic musicians and I longed to play my music in front of them. Another important reason was the opportunity to get some exposure in the guitar world, as it can improve your career a lot - and I’ve already noticed it!

How did it feel to hear your name read from the stage at the awards ceremony?

I couldn't believe it! Actually I didn't even expect to be in the top 3, so after I got an email that I entered it, all I hoped for was the third place. Going on stage after being announced as the winner was a very special moment for me, and it took some time to realise that it was real! 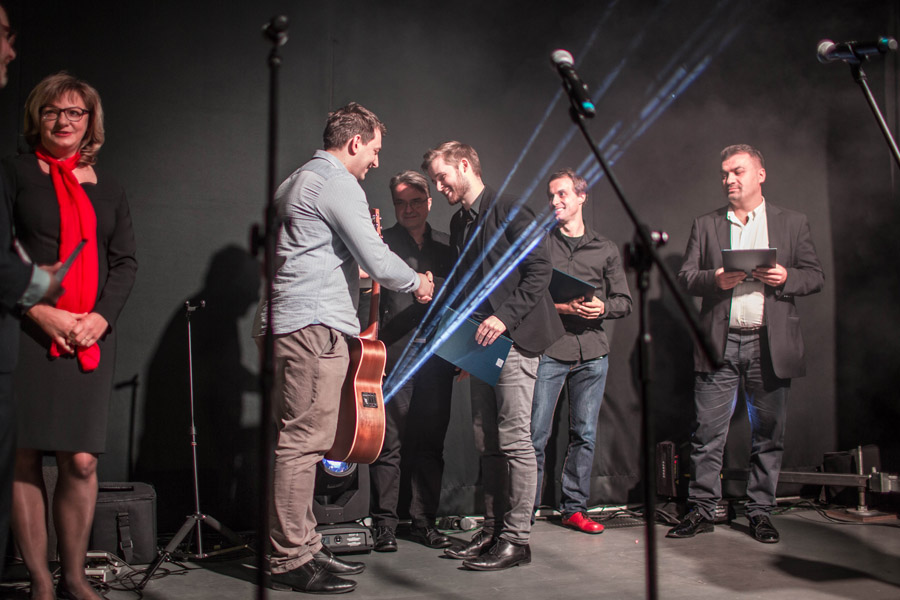 How old were you when you started playing guitar and why did you take it up?

My father was a music teacher at the local high school and always had a guitar at our home. He showed me the first chords. I never really thought about what instrument I want to learn to play, there was just no other instrument that attracted me more than a guitar. When I was eight years old, I got my first lessons from Emile Joseph at the nearby music school. A fantastic teacher and guitarist!


Can you tell us a bit about your musical inspirations? Can you name any composers, musicians or virtuosos that you mostly look up to or source your inspiration from?

Until July 2017 I am still studying Guitar in Dresden, so a big part of my inspiration comes from that scene.  The course I’m enrolled in isn’t only based on jazz or classical guitar - it is more about enabling the students to play a wider range of styles and finding our own voice. We have a lot of great and very different teachers, such as Stephan Bormann, Thomas Fellow, Reentko Dirks, Nora Buschmann and Daniel Wirtz.


For me it's the perfect place to become the musician I want to be. It’s a vibrant place, with students who come from all over Europe bringing their own musical backgrounds. This diversity is also a great inspiration.


I also tend to look for inspiration outside of the class. Lately, I am very inspired by folk music, especially the Scandinavian one, as well as film music. I also learn a lot and get inspired by the musicians I play with in my other projects, just to name the violinist Bjarke Falgren, jazz singer Anna-Lucia Rupp or guitarist Philipp Wiechert. I am very grateful to have those incredible artists in my life.


Was there anything that surprised you during the Guitar Masters 2016 contest?

Maybe I wouldn't call it a big surprise, as I experienced something that I pretty much hoped for. Meeting all the great musicians from all over the world was incredible! I enjoyed the atmosphere and how respectful and kind everyone was towards the other contestants. I made some new friends during those days and it was definitely a time I won't forget!


It all started with a video submission to Guitar Masters.

What impact do you think this contest can have on your future career?

I experienced some increased attention from the guitar world, which resulted in many concert bookings secured for this year. Especially the first month after winning the Guitar Masters prize was crazy! I hardly had time to play guitar, as I had that many emails to reply to! As a result, in 2017 I will play on at least three continents (Europe, Asia, Australia), which is a big step on the road to make a living as a touring musician.

That’s great to hear that you’ll be performing a lot this year, congratulations! Speaking of which, can you tell us what in your opinion constitutes a good live performance? How do you feel about performing on stage?

The answer is actually simple. I always enjoy a concert when the artist builds a connection with the audience and touches the people with his or her art. But to make that possible, different aspects are important, I think. I mainly play original music, or at least try to play music in an original way. But even if my audience doesn’t know the music pieces I play, I want them to understand it and not just appreciate the technical proficiency.

I strive to found my music on interesting melodies and grooves, not just on virtuosity or technique. However, having the right skills is still important to be able to express what you want to say with your music.

Learning to be myself on stage, especially in the break between the pieces is something which took me some time. Yet it’s an element that became very important. I like talking with the audience, adding a personal touch and telling the stories behind my pieces.

So it’s important to make sure our sound is good and that our list of songs is diverse. What I personally see as an indicator of a good performance is when the audience still wants more of my music even after 90 minutes set. Being asked for an encore always is a success!

It changes, but I think it’s usually my newest composition. I love playing my new pieces to an audience for the first time.

Last autumn I played my first concerts outside of Germany and I look forward to visiting new continents in 2017. I will work hard to be able to make a living from playing music. I will be over the moon if it works out!

Apart from that, I dream of having an old windmill someday! You could say that old mills are sort of my ‘weird’ hobby, when I don't play music...

If you hadn’t continued with music, what do you think you would be doing?
I am pretty sure that I would be studying architecture. Still, I am happy as a musician now!

What are your plans and next steps after winning the GM 2016?

After a bigger tour around Germany in February with Jule Malischke, the next step will be to finish my studies in Dresden, which will still be a lot of work. I plan to end my course with a big concert at the concert hall of the „Hochschule für Musik“ in June.

Besides playing concerts in Germany and in Poland, I will tour in China and Australia, and together with David Lindorfer in Austria. In between the concerts I hope to write and record a lot of new music - both solo and in my duo projects.  2017 will be an exciting year and I’m ready for it!